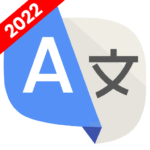 Let’s say you want to learn several languages at the same time or you don’t feel comfortable downloading many programs to translate different languages.
In this case, All Language Translate app is a great option for you.
You will learn languages and change languages to translate.
In addition, this program has the function of translating text on images using an intelligent OCR scanner.